NewsBook:  Missouri Government News for our last week of the year
Missouri Digital News and NewsBook is on holiday break. We'll be back in January for the start of the Missouri legislative session. In the meantime, enjoy our digital archives of rollcall votes, bills, lobbyists information and much more that go back more years than any other existing online site involving Missouri public policy. Below are the items from our last NewsBook of 2015.

Our Last Week of the Year

Our Last Week of the Year

A proposed bill could bring a sales tax exemption for deer urine in Missouri.

The bill specifies that captive deer used to produce deer urine for sale are included in the definition of captive wildlife for sales and tax exemption purposes.

Captive animals include animals like captive elk and quail.

The bill would include captive white-tailed deer and deer used to produce deer urine for sale.

Deer urine is used as an attractant for hunting.

A bill filed for the 2016 legislative session would require students to use the facilities -- locker rooms, restrooms and changing areas -- that align with their biological sex while they are on school grounds.

"What is common is the need to protect our children," Emery said. "Now that this issue has been raised, we can look at this and say, 'okay, how can all children be protected?'"

The legislation would require schools to provide separate facilities for students who do not identify with the gender associated with their biological sex.

The bill does not allocate funding for school districts to build the necessary facilities.

This issue is not new to Missouri.

Missouri made national headlines in September 2015 after a transgender student at Hillsboro High School in Jefferson County asked to use female facilities in school rather than unisex facilities mainly used by staff.

Parents and students alike protested the request, with parents voicing concerns at school board meetings and students staging a walk out during the school day.

Emery said these cases are not particularly common.

"What we've tried to do is draft something that allows appropriate protections for all children without having to change the world view of the 999 because of the one," Emery said.

"I could walk into virtually any restroom and it would be easy for me to identify whether that was a restroom for males or a restroom for females because there are physiological differences," he said.

Representative Elijah Haahr, R-Springfield, is sponsoring a bill that would require Missouri high school students to take a civics exam similar to the test required of those who wish to become U.S. citizens in order to graduate.

"If people who want to become Americans have to take that test, then it's incumbent on us to require our own citizens to live up to that same standard," Haahr said.

The test would consist of the 100 questions that are asked to those trying to become U.S. citizens. The bill would allow students to take the test at anytime between their freshman and senior year.

Haahr says Missouri is not the first state to consider legislation like this.

"I think 8 to 10 other states have now passed it. The belief, kinda moving around the country is that it's something, it just makes good sense for our students," Haahr said.

According to Haahr, this was a bill that was trapped behind a filibuster that lasted until the end of session last year. He believes the bill will have plenty of support going into 2016.

"My belief is that this is a bill that should get good traction early, and that the leadership will move it because it seems like it has bipartisan support, urban and rural support, and it's one that we believe that will not receive a significant amount of controversy," Haahr said. 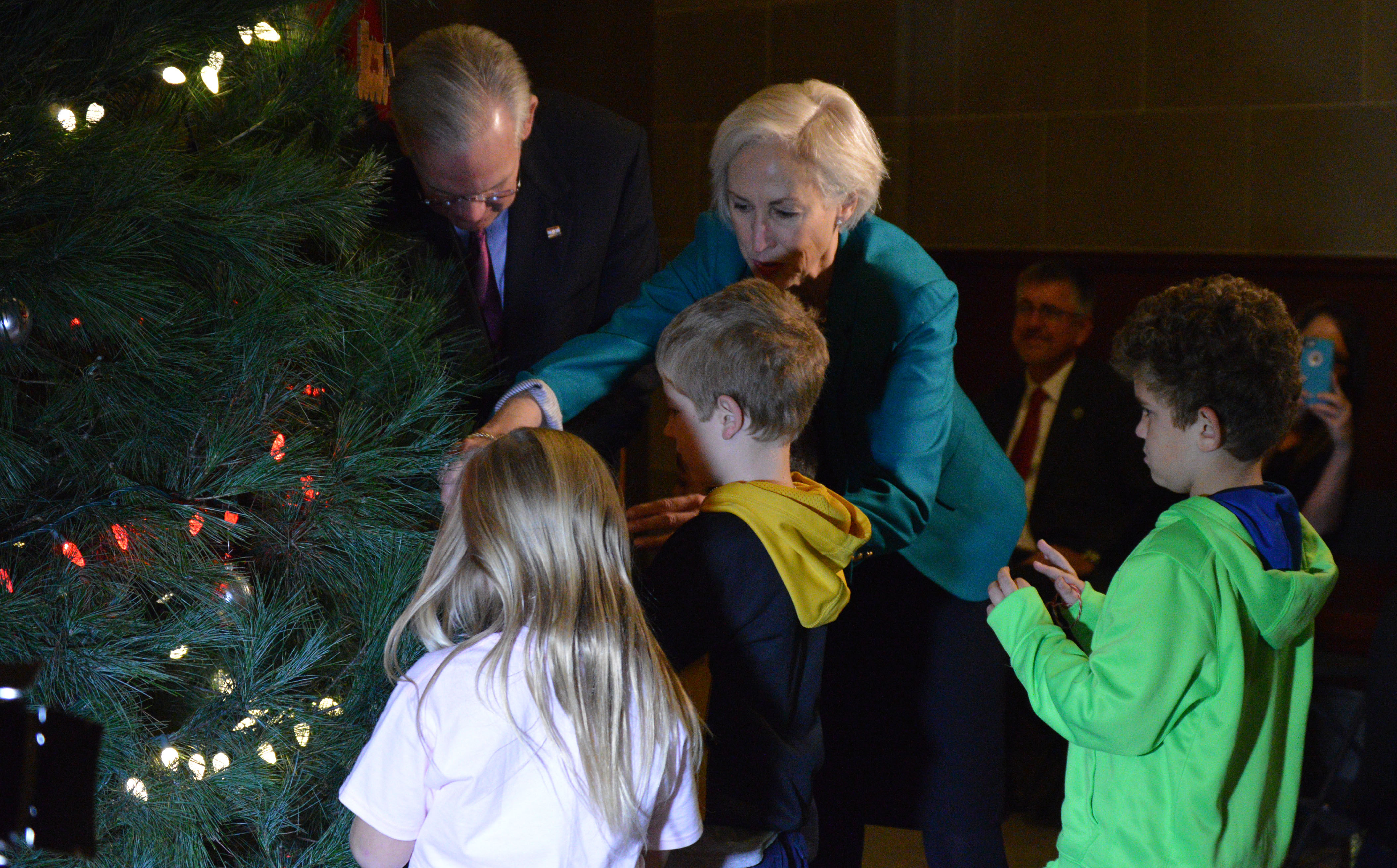 Gov. Jay Nixon kicked off the holiday season in Jefferson City by dedicating the state's Christmas tree and discussing the importance of the state and country's diversity.

Nixon told reporters after the tree dedication that refusing to let refugees or immigrants into the United States because of their religious identity is "political demagoguery."

"That's not what America is," Nixon said. "We're a diverse country. We're a diverse state. That's how this country was formed and how it's going to grow."

Nixon was one of a handful of Midwestern governors who did not echo the call to refuse entry to resettled refugees following a string of terrorist attacks at home and abroad.

Some Missouri lawmakers have called on the federal government to stop allowing refugees and immigrants into the country until it strengthens and secures its screening process.

"I think there's a very real likelihood that talk of that type can make the situation worse, not better," Nixon said of the religious screening. "I mean, if folks around the world think that, I think it's much more likely for them to become radicalized against our country."

According to Nixon, this kind of screening would not be effective from a public policy standpoint.

Rep. Margo McNeil (D-St. Louis County) has proposed a bill that could increase the state's gasoline tax by seven cents per gallon by putting the issue on the ballot for November's election.

"I think people deserve to have a voice in this process," McNeil said.

Other lawmakers have proposed more modest increases in the gas tax.

Rep. Keith English (I-St. Louis County) filed a bill that would increase the tax by two cents, calling it a "temporary fix" for the state transportation department's road and bridge repair funding problems.

"I feel that if you want to pay for infrastructure like bridges and roads that the people who should pay for it are the people that are tearing it up," English said.

Even a 1.5 cent increase in the gas tax failed to make it out of the senate budget committee last session.

Missouri's current 17 cent per gallon gas tax is one of the lowest in the country.