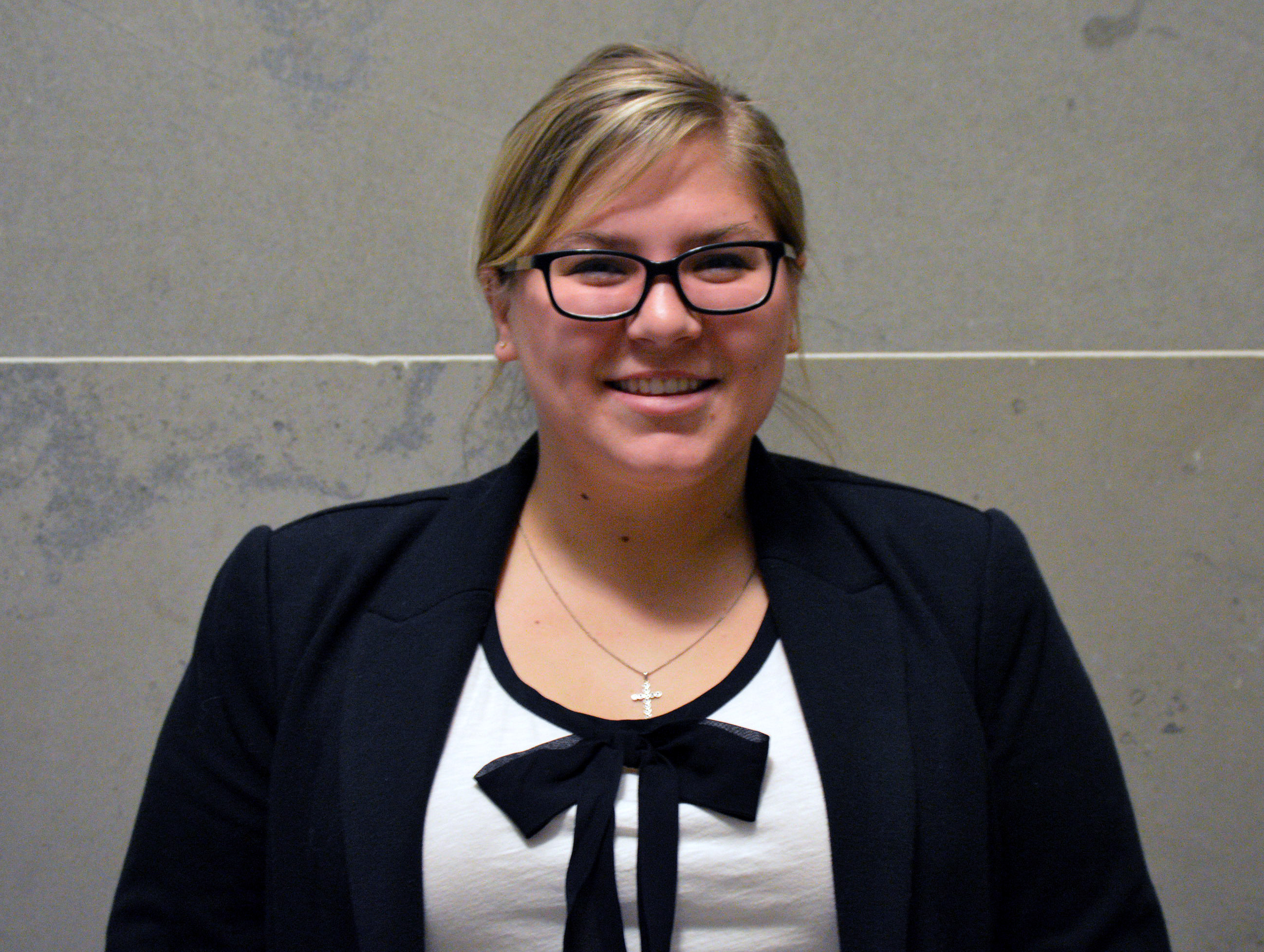 Hannah Knight is a senior at the University of Missouri School of Journalism with an emphasis in radio/television watchdog journalism. She is also minoring in political science and English.

Hannah was born and raised in Elko, Nevada.  She decided to study at the number one journalism school in hopes of becoming an investigative reporter.

Last year she interned for a Missouri State Representative.  This is her first year working at MDN.

In her spare time Hannah enjoys embracing her 79-year-old alter ego by reading, knitting and playing with her cat, Norma Jean.

Posted 03/05/2015:  On Wednesday I covered a Senate committee hearing where three resolutions were proposed for an Article V convention in order to amend the U.S. constitution. When I first heard about this hearing I was honestly confused. It slipped from my mind that not only can the U.S. Congress amend the constitution, but states can also call for a convention to do the same.

Luckily, I always carry a compact United States Constitution in my planner (it comes in handy more times than you would think) so I was able to whip it out and get the specifics. In Article V of the Constitution it states,

“On the Application of the Legislatures of two thirds of the several states, shall call a Convention for proposing Amendments, which, in either Case, shall be valid to all Intents and Purposes, as Part of this Constitution.”

This means that if 34 of the 50 states agree to call for a convention, it could happen. According to an organization’s website called the Convention of States: a project of citizens for self-governance, 26 states have started filing the necessary applications in order to assemble a Convention of States. Out of those, three states (Florida, Georgia and Alaska) have passed legislation that moves the process forward.

The Missouri Senators who proposed their resolutions to the Senate Rules, Joints, Resolutions and Ethics Committee said they were proposing these resolutions in hopes of convening a convention to change the federal government’s power, term limits and the budget. The Missouri House Emerging Issues Committee also heard two resolutions on the same topic and a bill that defines how delegates for a convention would be chosen.

If 34 states were able to agree on calling a convention, it would be the first constitutional convention since 1787.

Presciption drug monitoring
Posted 03/01/2015:  This week at MDN I covered a House debate about passing a bill that would establish what is called a Prescription Drug Monitoring Program Act in Missouri. The bill was on the schedule to be perfected during that session.  For about an hour I sat up in the press gallery and listened to nothing but support for the bill and various representatives from both sides of the aisle sharing their experiences with drug abuse that their families had endured.  They were relating to each other’s experiences and I was thinking, “Huh. This might actually be a bipartisan bill.”

Of course I spoke to soon. About an hour and a half in some representatives were strongly opposing the legislation. Opposition, to me is extremely interesting as a reporter. I want to be able to report on all sides of the issue, and most of the time someone’s reason for opposing a bill is not at all what you expected it to be. Sometimes their reasoning is in fact something that you never even considered.

The various representatives’ reasons for opposing the legislation was because they feared the database containing a person’s private prescription records could be hacked.  The opponents were also concerned that the government would be able to use the patient’s prescription drug information in a way the bill does not intend.

Supporters, however, argued for this bill as a preventative measure for prescription drug abuse and addiction. They also mentioned the need to control what they called “doctor-shopping,” which is were a patient who wants more pain medication goes to various doctors to get more.

In the end, the supporters won.  House Bill 130 was perfected while I was there. The next day the House with a vote of 107-48 passed it, and it now will head to the Senate.

Inspiration from Major Garrett
Posted 02/21/2015:  It has been another great week at MDN. Slowly but surely I’m beginning to feel more comfortable as a reporter. A big challenge for me has been feeling comfortable understanding a topic that I’m covering. I spend a lot of my time researching before hand the issue that I’m covering because I want to be able to interpret it for the public in the clearest way possible.

Over the past few weeks I’ve covered topics such as welfare, voter ID and unemployment benefits. These issues are important to our society and affect a lot of people. That’s why I am embarrassed to say that I did not know very much about these topics before having to cover them.  I’m told knowledge will come with experience, but sometimes it can be discouraging when there is so much that I still don’t know.

My inspiration and reassurance came from outside of the Missouri State Capitol this week. CBS’s Chief White House Correspondent Major Garrett was brought to Mizzou by the political science department, and I was lucky enough to hear him speak.  He talked about a variety of intriguing topics that he has experienced while reporting on the government.

He discussed the differences between the definitions of transparency between the past four presidents.  He retold his experience being with President George W. Bush in Florida on 9/11.  He even touched on his past reporting experience, which I found most inspirational. Major Garrett started out at smaller newspapers and slowly started covering state capitols and political issues.  With that experience he was then able to go onto Washington D.C. and work for Fox, CNN and CBS.

Hearing Major Garrett’s success story inspired me and made me realize that everyone has to start somewhere and learn as they go.  I am so lucky to be able to start my journalism career and learning process at MDN.
Watchdogs can be classy too
Posted 02/06/2015:  Becoming a journalist was never really a main focus of mine.  In fact, while I was still in high school, I planned on majoring in journalism because I truly wanted to be Ron Burgundy.  This (unfortunately) is not a joke.  I wanted the fame of being on camera, and I wanted everyone to know my name.  I even volunteered myself to read the morning announcements to my school every day just so I could say, “And you, stay classy Elko High School!”

Of course, after my first semester taking journalism classes, that silly/meaningless dream was smacked right out of me.  After listening to Charles Lewis, an investigative reporter and founder of the Center for Public Integrity, speak at one of my classes, I completely switched gears.  I realized that the real reason why I wanted to become a journalist was to act as a watchdog.

I love the role the press plays in checks and balances.  Without the press, people in power don’t really have anything holding them back.  I understand that power is still abused even with journalists writing stories, but I think that without reporters there would be a lot more of it.

During my first three days reporting for MDN I covered two stories about ethics.  One was covering the House committee hearing of a bill that would limit lobbyists from giving gifts worth more than $30.  The other story was about the “country club” hearings that had been going on and the cancellation of them.  These stories were my first as a journalist and they aren’t the best, but I still feel that with writing them I was able to begin my role as a watchdog.