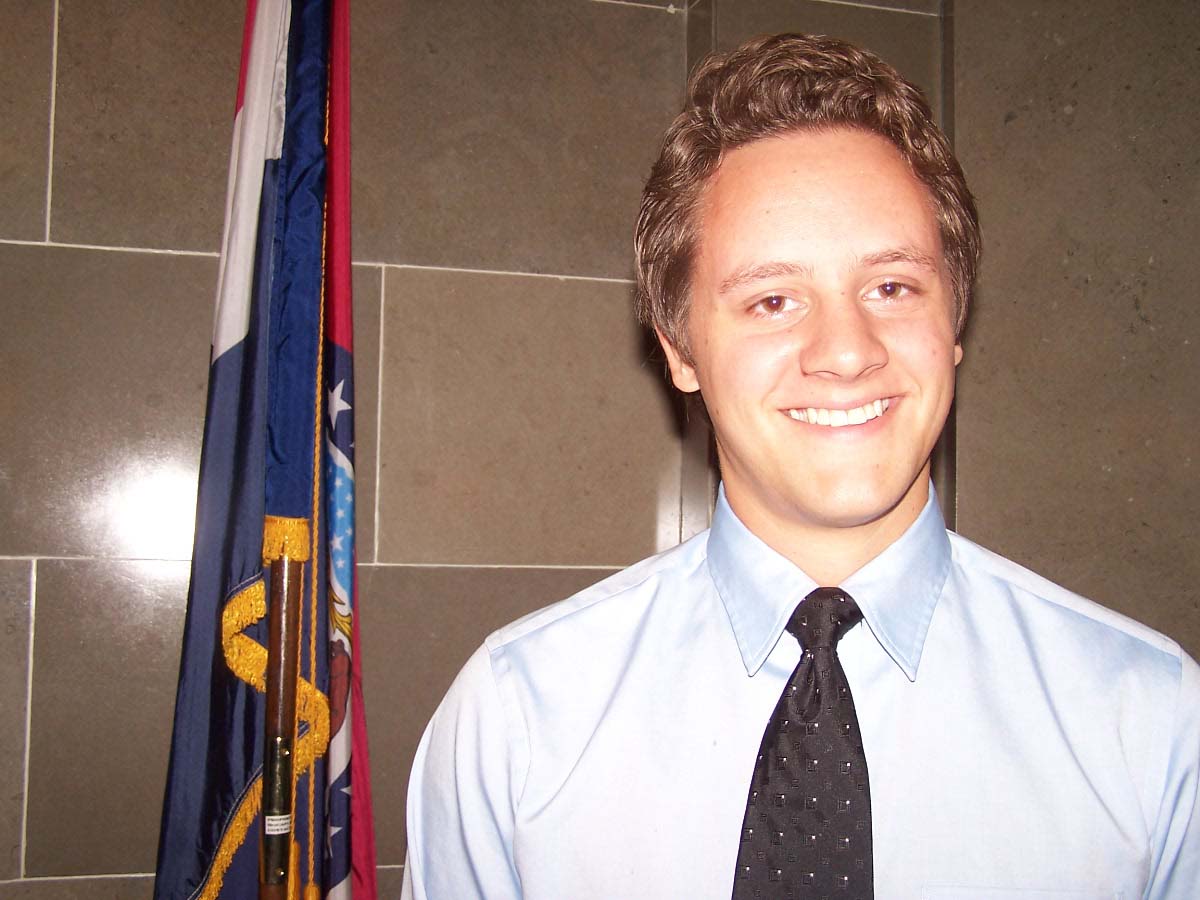 Kyle Deas was born and raised in northern California. He graduated from New York University in 2008 with a Bachelors of Fine Arts. He currently resides in Columbia, Missouri.

Posted 09/15/2010:  I recently covered a speech by Wayne Pacelle, the president of the Humane Society of the United States, at a restaurant in downtown Columbia.  A group of protesters was hanging out across the street, waving signs and chanting, and when the speech was over I walked over and spoke with some of them.

One of the people I talked to was an older man, balding and stocky.  He outlined his problems with Proposition B, which Pacelle was speaking in favor of.  He was miffed at being called a "puppy mill" owner and claimed to treat his animals humanely.  He even invited me out to his facility to look around.

This really made me wonder whether the notion of 'journalistic objectivity' is based more in cowardice than anything.  I own a dog that I got from a rescue.  I'm broadly sympathetic to the goals of animal rights groups, though I have some reservations about Proposition B in particular.  But I wasn't going to mention any of that right then, both because I like my hide intact and because I wanted him to keep talking to me.

My first day in the Jefferson City newsroom was Monday, August 30th.  That was the same day that Mark Templeton, the director of the Department of Natural Resources, resigned to take a cushier job overseeing oil spill funds.  On the basis of my being available (and  presumably little else, considering my lack of experience), I was assigned the story.

It was - if not a huge story - then at least an interesting one.  Templeton had previously been involved in a disciplinary action and was a known figure in the state.  His new job came with a considerable amount of responsibility and power.  I was excited to be reporting on it - though my enthusiasm dimmed somewhat when most of my calls went unanswered.

When I was doing basic background reporting for the story, I spoke on the phone with a Public Relations official at the DNR.  He was obviously having a busy day, but we chatted for a couple minutes and he seemed to relax toward the end of the conversation.  He gave me some good quotes, I thanked him, and the call ended.

But about twenty minutes later the official called me back.  He had, he said, been overly casual in our conversation, and had stepped outside the script he was meant to be following in press interviews that day.  He wondered if I could pull a specific quote from the story.  I wasn't really sure why - it was a fairly innocuous quote - but I agreed to discuss it with my editor.

In the end, the quote was deemed useful and added a bit of color to an otherwise rather dry story.  It ran.

I was somewhat conflicted about using the source's quote even after he asked me not to.  On the one hand, it is certainly not my job to protect him from his own missteps, and I had been quite clear with him that the conversation was on the record.  On the other hand, I felt bad for him.  In the midst of what was obviously a stressful day he had gone a little too far, and had probably been kicking himself ever since.  And he was probably going to be much less inclined to talk to me in the future.

I'm glad the quote ran in the story.  But at the same time the experience underscored the fact that when reporting I am talking to people, not simply sources, and people are prone to mistakes and to regret.  Was I obligated to pull the quote?  No.  Would it have been better for everyone involved if I had?  Now, the answer seems obvious.  But at the time I was far from certain.

All in all, a lot to mull over on a busy first day.