The legislation passed Missouri's lower chamber by an overwhelming 113-37 margin. Abortion providers would be required to give patients information such as the doctor's name, alternatives to the abortion and places where the patient could receive an ultrasound.

The bill would also make it a crime to coerce someone into having an abortion and require abortion providers to contact a prosecuting attorney before performing an abortion on a patient under the age of 18.

Rep. Jeanie Riddle, R-Mokane, recounted the story of a childhood friend who was raped by the girl's biological father. The friend was impregnated more than once, Riddle said, and then taken to have the pregnancy aborted.

St. Louis Democratic Rep. Stacey Newman, spoke of her experience as a victim of date rape and what she said would be negative consequences resulting from the legislation.

Rep. Cynthia Davis, R-O'Fallon, Davis the provision requiring doctors to contact a prosecuting attorney and to keep a tissue sample for DNA testing as an "enhancement" over similar legislation introduced during the last two legislative sessions.

House approval is greater than the 109 votes that would be required to override any veto by the governor.

The measure now heads to the Senate where a Democratic filibuster had stalled action on a similar abortion-restriction measure.

Get the full story here: http://www.mdn.org/2010/STORIES/ABORPASS.HTM

A week after two House members had to be restrained from a physical confrontation, the chamber passed a measure allowing staffers to bring weapons on the House floor.

By an overwhelming margin, Missouri's House gave first-round approval to a measure that would let lawmakers and their staffers carry hidden weapons into legislative chambers -- if they have concealed weapons permits.

Current law allows any member of a governmental body with a concealed weapons permit to carry a weapon into a meeting of that body.

The measure approved by the House would expand the right to the Capitol building as well as committee meetings in the Capitol. It also would extend the right to include legislative staffers who have conceal-and-carry permits.

By a vote of 63-86, Missouri's House rejected a proposal that would give St. Louis budget and policy control over its police department.

Since the Civil War, the St. Louis Police Department has been under the control of a board nominated by Missouri's governor.

St. Louis officials have urged giving the city control over its police agency, but the idea has run into stiff opposition from some St. Louis police officers.

The Senate Appropriations Committee began their mark-up of House budget bills on March 31, a process lasting late into the evening and taking up much of the following day.

Some of the proposed cuts included slashing around 125 positions within the Corrections Department would be eliminated under cuts proposed by the Senate Appropriations Committee.

The cuts would affect prisons across Missouri and would shave almost $4 million dollars off the budget proposed by the House.

In a separate measure, the Senate committee rejected a House proposal to fund health services for inmates with $100 million of expected federal funds. The committee decided to revert to the governor's position, funding the services with money from general revenue.

Both chambers must agree on the same budget proposal before it can be sent to Gov. Jay Nixon.

Missouri has overwhelming number of wild hogs, Rep. Tom Loehner said, and he wants to get rid of them.

Loehner, a Republican from Koeltztown, is working to further regulate the commercial hunting industry by tightening fines and regulations for recklessly released animals. Loehner said this industry has contributed to the number of wild hogs in Missouri.

According to Loehner, these animals could have been released from a variety of sources: hog operations, pet owners and escapees from licensed hunting operations. 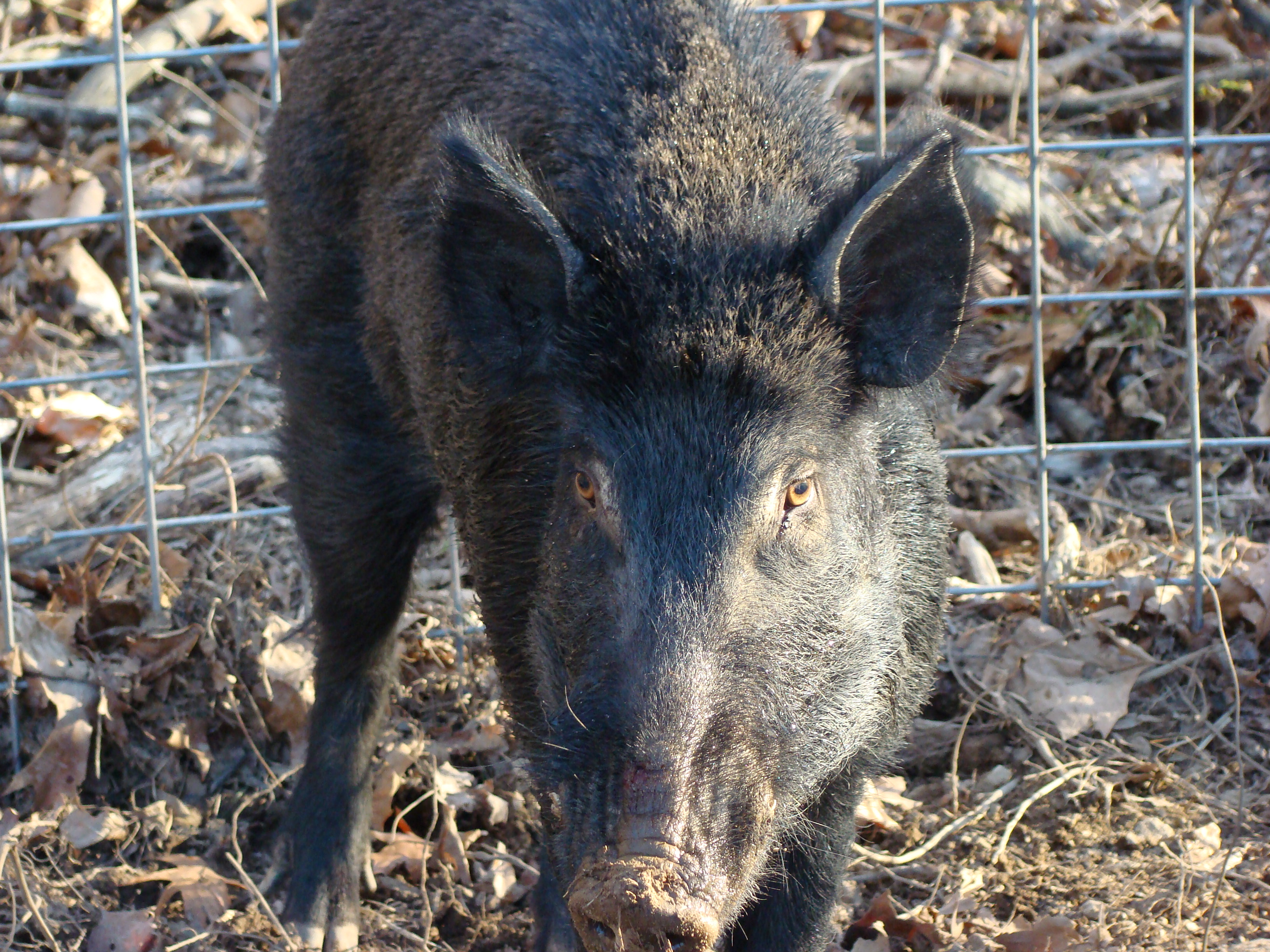 [Young wild boar trapped in Iron Co. that weighed in at an estimated 100 pounds. Photo courtesy of Dan McMurtry from the USDA's Wildlife Services.]

If the legislation passes, the Agriculture Department's director would be given the full power to decide on a list of regulations concerning fencing and health standards while in possession of a wild hog held on private land.

The department will also be responsible for awarding permits annually for possession of any wild hogs. It would be illegal to transport these wild hogs across public land, unless specifically meant for slaughter purposes.

If a person is found to be in violation of any of the regulations concerning unlawful possession, confining and transportation of wild hogs, the legislation will implement a fine of up to $1000 and a class A misdemeanor. If a person recklessly releases swine into the wild, they will also be fined.

Get the full story here: http://www.mdn.org/2010/STORIES/SWINE.HTM

Republican House members have asked Missouri's Attorney General to file suit against the federal government, according to an Associated Press report.

A spokeswoman in Koester's office said he has not sued, but is watching the situation, the Associated Press reports.

The filing deadline to run for office in the 2010 elections passed March 30.

The Associated Press reported that Rep. Linda Fischer, D-Bonne Terre, will be opposed by her husband John Fischer, who is running as a Republican.

John Fischer denies that he has ever physically abused his wife and that his running for office has anything to do with the protection order she filed against him.

In other filings, the Democratic Party does not have a candidate opposing U.S. Rep. Blaine Luetkemeyer, a Republican representing Missouri's ninth district. The Columbia Daily Tribune reports that this is the first time a member of the state's Congressional delegation has run without a challenger from the other major party since 1984 when Richard Gephardt ran unopposed.