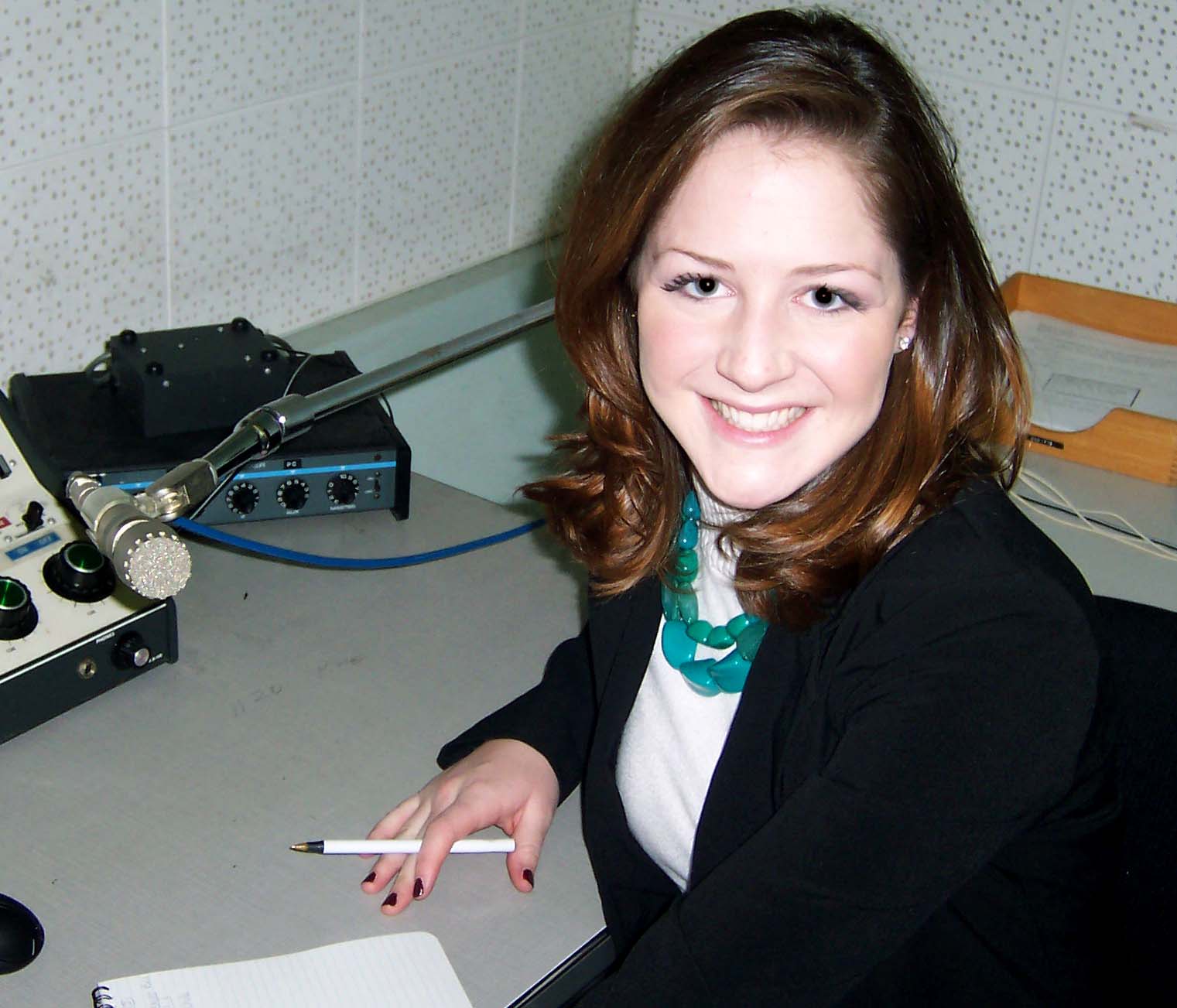 Hello! My name is Jennifer Meckles, and I am double majoring in Broadcast Journalism and Political Science at the University of Missouri. I grew up in the Illinois suburbs of St. Louis -- a little town called Alton.

I knew I wanted to work in the media after my first trip to New York City. While I was there, I had the chance to go backstage on the Today show and shadow a producer for an entire weekend. It was a whole new world that I never knew about. Then, when I came back to the Midwest, I started working summers with CBS radio (KEZK and Y98) in St. Louis. I was hooked. The fast paced, competitive, 15-hour days of a radio-tv journalism was addictive.

Since I came to college, I've continued with this media whirlwind. I have spent the last year working for NBC affiliate KOMU TV8 (Columbia, Mo.) in their newsroom doing a number of odd jobs. Anything from editing, to reporting, to anchoring -- I've tried them all. And now, I can add capital reporting to my resume as I work for Missouri Digital News in Jefferson City!

My future goals: I want to be either a producer or reporter for a top 25 market station, or work network news covering the White House. At this point, I'm leaning toward the producing side.

"I believe in the profession of journalism. I believe that the public journal is the public trust; that all connected with it are, to the full measure of their responsibility, trustees for the public; that acceptance of a lesser service is betrayal of this trust."  - Walter Williams

Worked on two stories today. The first was my feature. I interviewed the bill sponsor (Senator Charlie Shields) and started dubbing tape from the interview and transcribing. I have an interview set up for next week with another source. Hopefully it will be finished by this time next week.

The second story was another from the Senate floor. I'm starting to become a regular in there, I believe. This bill would give money from the federal stimulus to health care services for low-income workers in Missouri. These are the people who make too much to be covered by Medicaid, but still cannot afford thier own insurance. It was a heated debate between the Republican senators, especially between bill sponsor Senator Tom Dempsey and Senator Jason Crowell.

I had a great deal of help from other press folks on the floor, and had my first mini "press conference" with Senator Dempsey following the debate. I, with three other reporters, interviewed Demspey and stuck mics in his face. Very cool!

This week is the legislative Spring Break... which means a relaxed week for us students! I came into the office today and worked on my feature story. I'm focusing on a bill sponsored by Senate Pro Tem Charlie Shields, which would install a rating system for preschools, before, and after school programs. I already spoke to Senator Shield, but unfortunately lost it in the system after Phill cleaned it out. It's my fault that I didn't communicate better. Looks like I'll be redoing an interview after my spring break...

Worked on the feature a bit today, did about and hour or so of homework on the bill. I made a list of questions I wanted to ask and place an important phone call. Unfortunately, no call backs today. I'm going to see if I can't get ahold of my source tomorrow, maybe take one of the KBIA recorders with me and just go to the woman's office. Otherwise, just trolled around the capitol, reading news and researching my story. Planning on doing more work from home.

Allison entertained all of us in the newsroom with her discovery of a recipe, the "Ladies Brunch Burger" by chef Paula Deen of the Food Network. A cheeseburger, with a fried egg and bacon, between two glazed donuts. Bring on the calories. I challenged her to actually eat it!

More in two weeks, with the return of the legislators and students,

Posted March 12, 2009:
Yesterday I reported again from the Senate floor. This time the big focus centered around a tax credit bill backed by Governor Nixon. No vote was taken, but the legislation spurred a heated debate between a few senators.
Kansas City Senator Matt Bartle doesn't like tax credits in general, but he said ones targeting specific businesses are especially bad. According to him, the big businesses are like "tall hogs" at a feeding trough -- pushing the others out of the way.
So, there was my story: tall hogs.

I realized I have a true weakness in financial reporting. Most of this bill and its debate went over my head, and I clung for dear life to Max and Phill's explanations. Currently looking for more ways to expand my knowledge about taxes, credits, finances, loans, ect...
I did turn out a nice, long story -- a full 1:25. Whoo hoo!

Wednesday in the Capitol: spent some time on the Senate floor! Three bills passed through the senate and will be sent to the House next.

My story focused on one of those bills. Senator Jolie Justus proposed a bill that would require the State Health Department to mail middle-school girl information about the Human Papillomavirus (HPV) and prevention methods.

HPV is linked to cervical cancer -- the number two cause of cancer in women.

This was the third attempt by Justus. Will she have better luck this year?

I set two records this week:

Stay tuned for more from the Capitol!

Wednesday I covered another Senate hearing... seems to be a common thing for me! In short, the proposed bill would expand Missouri's virtual schools program. What is this "virtual schools" programs, you ask? Its a a computer-based program where little Johnny can take classes from home instead of going to school. Created to help student who have to miss classes for medical or financial problems, the program can also benefits students who simply want to get ahead on credits. The bill would give state funds to the program. No vote taken, just a hearing.

Met a couple of new senators this week - I talked to Senator Rita Days after hours on my way out of the building. She is very involved with education-based bills and programs. Also learned a new, very valuable lesson from Phill: look up background information on senators I am covering. I discovered one senator -- Yvonne Wilson -- on the Education Committe (who I used a soundbite for) was a teacher for over 50 years. Her bites and position on the committee make much more sense one I had that information.

I'm getting slightly quicker with writing. Only taking about 4-5 hours a shift, compared to the first week which was almost 8! Its becoming more routine and I'm understanding the system more each shift.

Looking forward to next week... maybe I'll cover the House??

Today I covered another Senate hearing -- though this one was a certainly more entertaining. Here's the "reader's digest" version: St. Louis County Democrat Senator Rita Days is proposing a bill that would do two things. 1. It would put a moratorium on the death penalty for three years while, 2. creating a ten-person committee to study the Missouri death penalty and discuss possible alternatives. While there was no opposition to the bill, the supporters arrived by the busses. Notable witnesses included a former D.A. and prosecuting attorney from Texas who found out after years of successful cases that a man he sentenced to death was in fact, innocent. Another interesting speaker was a man who spent 24 years in jail on Death Row, and was only months away from his penalty. Just in time, a re-trial proved his innocence and he is now free. Emotions were high with another witness, whose husband was murdered almost four years ago. With undeniable strength, she still rallies for the rights of those on Death Row.

Cool hearing, and so far easy to understand. I was very proud -- all three of my scripts went through little revision during editing. I think I'm learning! My favorite part of this whole process is the producing aspect -- all the techno-gidgets and gadgets and editing remind me of the work I do in television. And the writing is coming along, so I'm enjoying that more too. Still struggling with good leads and anchor intros. I think that will be my biggest hurdle this semester.

Next week: Looking forward to seeing how today's bill fares. No vote was taken, so I will be watching it progress. Also, maybe next week I'll produce FOUR wraps? Or maybe a two-bite story?

Today I covered a Senate hearing - concerning a bill that would require welfare recipients to be drug tested. Those who test positive would lose welfare benefits for three years and also be referred to drug treatment. It was my first story for MDN -- how intimidating! I had plenty of help from our TAs, but still managed to wander around confused. Luckily, I had a good understanding of what the bill was about and who was sponsoring it. One very important thing I learned today: I'm covering the hearing, not just the bill. When I came back to the newsroom, the one question I was not fully prepared for was, "so what happened... what was the result?" It seems so simple, but I was so focused on the bill contents, support, and opposition, that I didn't pay as much attention to what actually happened!

Now that I am finally finished (its almost 8:00pm) I get to go home and write MORE for my broadcast lab, and a political science research paper due Friday. I think my fingers just may fall off my hands. I sure do love college!

Today was my first day on the job in Jefferson City. I actually did not cover anything specific today, due to too many reporters and too few stories. However, I decided on my enterprise piece for the semester. I'll be focusing on a bill centered on early childhood education. Here's the breakdown: Senate Pro Tem Charlie Shields has reintroduced a bill that would establish a voluntary rating system for early child care facilities. These facilities would be "graded" on a scale. If a facility is licensed, its would be baseline. The highest rating would be if a facility get accreditation.

The first thing I did was to read the details of the bill, and find out who supports it and why. I spoke with the Majority Caucus Communications Director, Farrah Fite, who gave me a background of this bill along with more names to contact. I'll be interviewing Senator Shields this week by phone, and I hope to catch him in his office next week.

Several states have already adopted a rating system, and many more are still developing the plan. Missouri is one of those states researching and deciding if this is a good idea.

Supporters of the bill say it will be beneficial not just short term to parents looking for a good pre-school, but long term as well. Teachers would need special certification, which calls for a better degree. Also, the better a child's early education, the less likely that child will have educational and behavior problems later in life -- says supporters.

However, there are many in opposition. Some fear that the higher the ratings of a school, the more costly it will be to send a child there. Some parents simply cannot afford to pay for pricey education. Others in opposition say the government should not be involved in rating education.

I'm looking forward to following this bill as the semester continues.