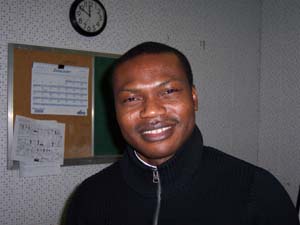 Kenneth Inaku Egere is a Catholic priest of the Diocese of Ogoja, Nigeria and a PhD candidate at the Pontifical University of the Holy Cross in Rome. His research interests include Strategic Communication and Media Planning. He is currently a visiting scholar at University of Missouri.

Religion Outside the Box

While the term lobbyist brings up images of well-financed agents of special interests, there is a quite different type of lobbyist who walks the hallways of Missouri's statehouse - those who represent the interests of religious faiths.

Kerry Messer is a Baptist lay minister and a lobbyist for fundamental Christian causes.

He said his primary professional mission is to challenge and encourage orthodox Christian ethics in arenas of private, corporate, and civic life. He may spend as much as 16 hours daily at the statehouse opening a new era by redefining the relationship between religious faith and political policies and campaigns.

For the past 26 years, Messer has spent his career and ministry at the Missouri Capitol reinforcing the nexus of religion and politics that has been the most persistent and controversial storyline in American public life for much of the country's history.

Logistically, he is engaged by advocating active citizen involvement in all aspects of the public square, including both public and private forums, though, recently, Kerry has increasingly become outspoken on a myriad of religious and social issues. His campaign and lobbying strategies include efforts against legislation on stem cell research, abortion rights, gay marriage and other biotechnological issues that have raised political red flag for fundamental Christians.

The Baptist minister has been president of Missouri Family Network for the last 25 years.

Messer says he spends his time "addressing the plague of pornography in culture, abortion issues, and homosexuality." Giving reasons why he lobbies on such issues, he says, "These types of issues, there was a lack of people stepping into the public square and articulate a sound reasoned expression of why those positions supporting these issues were wrong and why it is appropriate to oppose the free flow of pornography, the expression of homosexuality, the use of abortion contraception to mention a couple of them."

His mission, he says, came "from the holy God."

Messer says he was compelled by the Lord to the take the banner to be the spokesperson for the conservative Christian community, which he represents on broad spectrum of issues. He is one of more than 2,000 registered lobbyists in Missouri. "Of those registered lobbyists, virtually every one of them comes from some special interest where some kind of money is being involved, we want to make sure that family values donŌ019t get lost in the cracks," Messer said.

He said he pursues his efforts by looking at a broad range of issues, evaluating them especially on what impact they would have on family life in Missouri. According to Messer, this brings these perspectives to lawmakers' attention.

The advances in biomedical research, especially in the recent past, have generated a lively public debate on the morality of embryonic stem cell research and human cloning across the country.

Indeed, the embryonic stem cell research, which uses cells found in three- to five-day-old human embryos to seek cures for a host of chronic diseases, which have been described as "building blocks of nature."

Though this discovery that offers the hope of cures for chronic and debilitating conditions, such as juvenile diabetes, Alzheimer's disease, Parkinson's disease, spinal cord injuries and blindness to many patients and families is for Messer, it has been a source a concern among some Christians.

"I am not trying to push anything on anybody as far as religion is concern, but from that open bias which am willing to admit, I do believe I have the right in this country to step into the public square and advocate for what I and my constituency, those within the Christian community believe public policies should be on variety of subjects," Messer said.

With his open bias, Messer would oppose unrestricted use of stem-cell research. His opposition and perhaps his introduction of religious beliefs into the statehouse could be supported by the fact that, according to him, "The constitution of our country and as well our state recognizes everybody's religious liberties. At the same time, the state itself - as well as the nation - does not have a state religion."

On other sensitive issues like abortion, which obviously about 36 years after the U.S. Supreme Court's historic Roe v. Wade decision granted a woman the constitutional right to terminate her pregnancy,

Messer does not favor allowing such a court verdict to sleep in limbo. Though views about the issue vary among Americans and thus the rest of the world, with a great majority debating whether or not life begins at conception.

Missouri legislation on this recurrent hot topic has constantly stirred the pot and defined Kerry Messer as a pro-lifer. In his Gospel of Life, Messer would leave no stone unturned, defending the rights of the unborn, doing exactly what his clients, Missouri Baptist Christian Life Commission, Americans United for Life and Alliance for Life would expect of him.

He said he would not consider exceptions even for cases of rape, incest or some sort of malformation during prenatal development. His view on abortion gives credence to what Pope John Paul II said: "Human embryos obtained in vitro are human beings and are subjects with rights; their dignity and right to life must be respected from the first moment of their existence."

For Messer, abortion is bad, and he adds, "We must tell the people about it."

Another issue that keeps Messer working around the clock at the Capitol is gay marriage and homosexual practices. Kerry lobbies and opposes legislation on gay marriage as well.

For him gay marriage and homosexual orientation are neither genetically determined nor valid alternative lifestyles. Therefore, Messer, the husband of Lynn M. Messer, father of two sons (Aarron and Abram) and eight grandchildren who also serve in the ministry of Missouri Family Network believes that advocacy for such (gay marriage and homosexuality) "undermines traditional marriage". He views

such practices as changing the culture negatively in which his constituency is raising their children.

As a lay minister, he also lobbies for small church communities on issues of social impact. Kerry makes sure that the legislature does not pass bills into law that would make the lives of these worshiping faith communities unbearable, if not impossible to exist. Talking specifically on the current water well regulations going on in the statehouse, he says, "I am working on legislation that would exempt church houses of worship from these water well regulations."

Walking along the length and breadth of the Capitol building where lobbyists represent financial interests, Messer acknowledges his unusual role.

"Money is very involved," he notes.

"I do not have the kind of money it takes to buy influence; I am a poor lobbyist, I am the only lobbyist I know that legislators take to lunch."

Great things would sometimes though not frequently happen in strange ways. The hallways of the Missouri statehouse that once seemed like a nightmare gradually have become like a pleasant garden path one would ever love to walk on.

A few weeks ago, my longest days of the week were Tuesdays, when I had to walk across the length and breadth of the Senate hall with other reporters seeking out the day's news. Initially, I dreaded it. It was boring and very frustrating. Committee hearings on issues that have no direct relation with my personal values sicken me.

Values change no doubt and what one calls personal values could be subjected to the natural law of change; it swings from one direction to another. Caught in the web of this change, I dramatically found out that, what I would call a nightmare has become a desired paradise.

Interestingly, our busy and noisy Missouri Digital Newsroom in the state Capitol has become the most inspirational atmosphere for professional journalism. The hustling and bustling of activities in the newsroom make the profession attractive.

A LEAP IN THE DARK

I wonder how life would look like without the innate drive to step into the unknown. The beauty of it would have been hardly imagined without the quest for new discoveries. Few weeks ago, out of curiosity, though with fear and trembling, I found myself in a seemingly unusual and new environment.

Religion, culture and race relatively different from what I have been used to over the years. The visible reality in the Missouri capitol building boldly painted a dressing code that immediately force me into believing or better still, realizing the granite reality that portrayed me like a fish out of water.

Playing into the strengths of my self confidence, I tried to pay deaf ears to this compelling reality. What a fun! A clergy man in the midst of politicians.

I guess, an American police officer corporately dressed would feel same, should he found himself stepping into pope Paul VI's hall in the Vatican city state during one of the plenary sections of the collage of cardinals in Rome.

The day seemed longer than ever, I was wondering if the hand of the clock could thick a little faster. However, at the sleep of the day, I began finding reasons why I ought to be at the statehouse. Not very sure indeed what I wanted though that never stopped me from developing interest working at the Missouri Digital News room.