JEFFERSON CITY - Missouri's state auditor responded to an editorial by the St. Louis Post-Dispatch questioning the motivations for his lawsuit against the governor.

The editorial suggested Tom Schweich was motivated by the $300,000 the governor withheld from from the auditor's budget.

According to the editorial, "Mr. Schweich wants the court and the public to believe that his budget is more important than helping a city rebuild from one of the worst natural disasters in our state's history."

An obviously angry Schweich responded with a press conference where he said the Post-Dispatch has attacked him on multiple prior occasions.

"I will do what's right and if you look at the history of the audits, I don't worry about whether somebody's a Republican or a Democrat," Schweich said. "I just worry about whether they are following the law and good accounting practices. That's what I'll always do and I don't care about the political repercussions."

Schweich's lawsuit was filed against Nixon on Aug. 26, accusing Nixon of violating the constitution in his decision to pull more than $150 million from the budget for disaster relief payments.

General revenue makes up $57 million of the disaster relief funding, but the rest of the funding comes from cuts to more than 45 state agencies and programs. 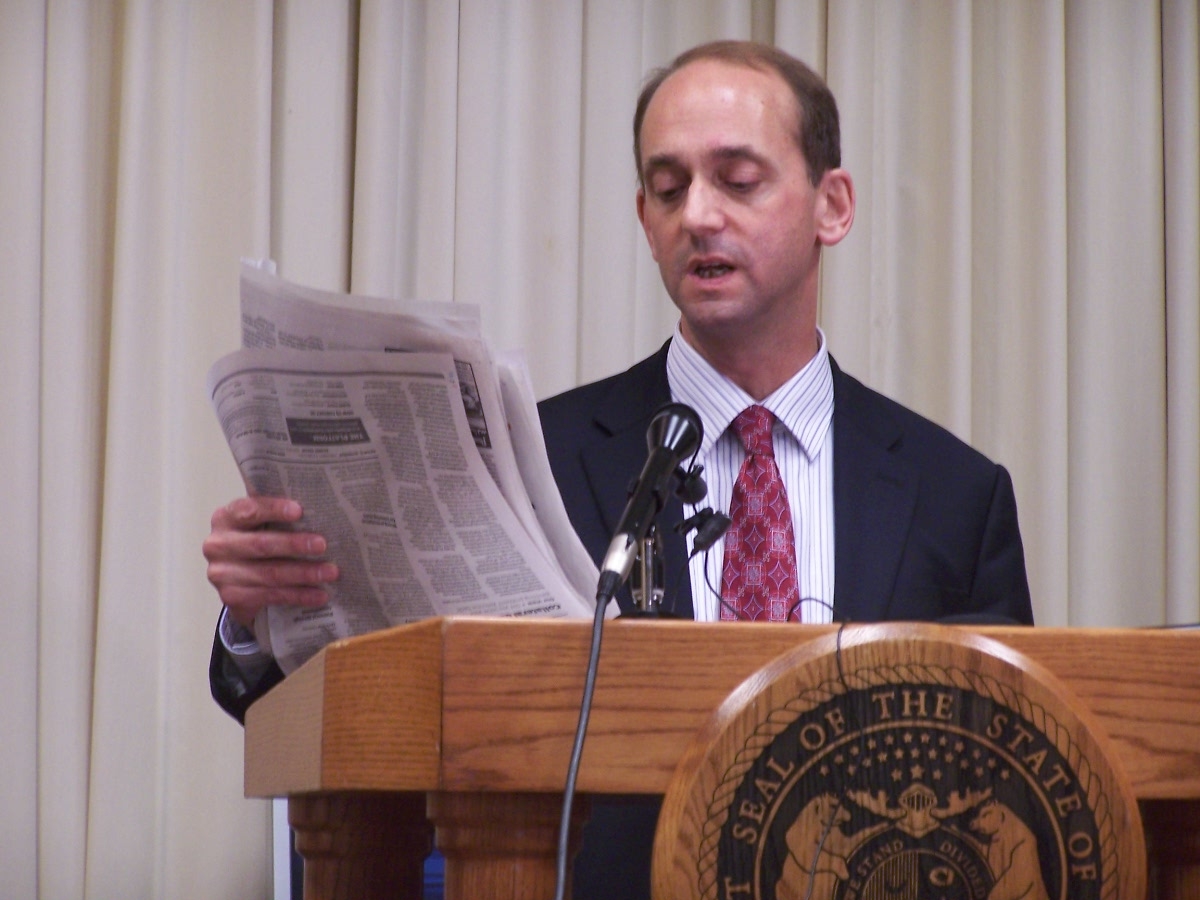 "These withholdings are critical," State Auditor Tom Schweich said in a press release. "They will result in programs ending and jobs being lost."

Nixon moved money to disaster funding from education, including cuts to community colleges and four-year institutions, Bright Flight and Access Missouri college scholarships, Parents As Teachers and the Missouri Higher Education Loan Authority. Medicaid, crisis care and children's treatment services as well as grants for Alzheimer's and domestic violence are losing part of their funding.

Schweich's office said it requested documentation from State Budget Director Linda Luebbering in July that would explain where the reserved funds would be spent, but no documentation has been provided. Luebbering has said the office doesn't know the specific dollar amount needed for the state's disaster relief obligations; the damage assessments that will determine how much money is needed are still in progress.

The auditor's lawsuit charges Nixon with violating the constitution by making the decision to withhold funding without legislative approval or the necessary data, such as how much revenue is available for fiscal year 2012, to back up his action. In a letter to the governor on Aug. 19, Schweich expressed concern that the governor's actions violated the law.

"When the Governor ordered the witholdings in June 2012, FY 2012 had not begun," Schweich is quoted in a news release as saying. "And therefore, actual revenues could not have been lower than anticipated FY 2012 revenues."

During a House Budget Committee hearing, Luebbering said that revenue for fiscal year 2011 had grown 5.9 percent from the previous year.

Article IV Section 27 of the Missouri Constitution states that the governor can only withhold money from other programs if actual revenues are less than the estimate used to determine the budget. However, actual revenues aren't available yet.

In his lawsuit, Schweich noted that the governor had withheld funds from the Republican-controlled legislature and the Republican auditor, but that Nixon did not withhold funds for his own office or any Democratic statewide-elected official. The case listed a 4.6 percent budget cut for the General Assembly and a 4.5 percent reduction to the auditor but no decrease in Nixon's budget.

"The Governor has no excuse to violate the constitution," Schweich said in the release. "He has the same obligation of transparency and accountability as any other elected official."

The case has been assigned to Cole County Circuit Judge Jon Beetem.

Nixon and and Democratic Attorney General Chris Koster have until the end of September to respond. A tentative hearing date has been set for Nov. 28.