Reports of hostage situation shut down parts of capital city

Date: November 10, 2009
By: Rebecca Berg and Stephanie Fleming
State Capitol Bureau
Links: The timeline of events and the story on how workers handled it all 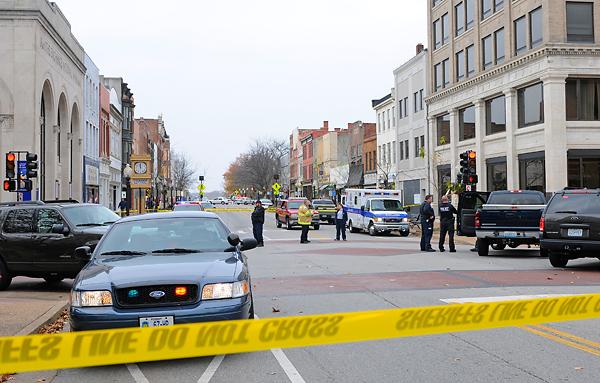 [By: Jessica Cherry]
JEFFERSON CITY - An announcement a woman says she heard on an elevator led police to shut down a portion of the state government and the capital city Tuesday.

Streets were cordoned off and some government offices closed after police received a report, later found to be incorrect, of a hostage being held in a building housing the state's utility-regulating agency.

As police reported the story at the end of the day, the chain of events was started when a female employee of the Missouri Public Service Commission told her supervisor she had heard a hostage announcement on the elevator. Her supervisor called the alarm company. The company, Sonitrol, called the Jefferson City police. From there, it quickly became a national media story.

Capt. Michael Smith of the Jefferson City Police Department emphasized that details remain sketchy in the case, which he called a "very unique situation." Police could not confirm whether the Public Service Commission employee who first reported the hostage situation had any evidence to support her claim, nor could officials say from where an announcement in the elevator might have originated.

"I appreciate your confusion," Smith told reporters late Tuesday afternoon. "We have the same confusion." 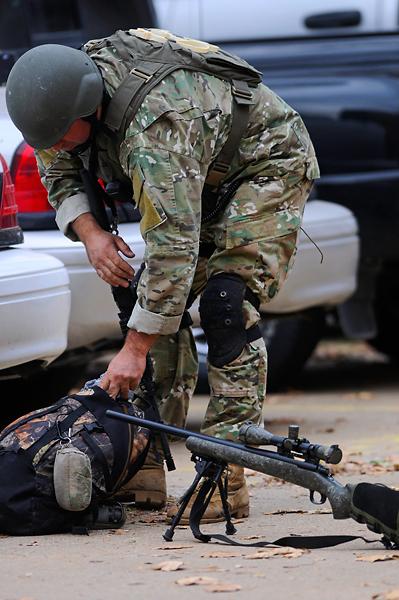 Earlier in the day, the report from the alarm company led police to close a four-block area in downtown Jefferson City to pedestrian and vehicular traffic for approximately four hours.

As SWAT teams and police officers entered the building, called the Governor Office Building, sharpshooters were posted atop a neighboring parking garage and a Missouri Highway Patrol helicopter circled the area. Law enforcement officials were also stationed outside the governor's mansion, which sits across the street from the office building.

The building, originally housing the Governor Hotel, does not house any offices of the governor.

Approximately 60 to 65 law enforcement units responded to the building and the surrounding area, officials said.

Lt. Gov. Peter Kinder watched the initial scene unfold from his office window two blocks away. He recalled seeing police cars parked on the street as officers closed the area.

Kinder said the incident affected more than the single office building, though it did not affect his office specifically.

"It probably slowed down the conduct of ordinary business in Jefferson City today," Kinder said.

Reports of a hostage situation did slow ordinary business at the Governor Office Building, where employees were required to remain locked in their offices beginning at around 10:30 a.m. until they were evacuated by police.

All of the approximately 155 personnel in the office building were safely evacuated by 2 p.m., police department officials said. Some employees returned to work after the building reopened, according to employees in the office.

Chairman Robert Clayton of the Missouri Public Service Commission was on the eighth floor of the office building when he was notified of the potential hostage situation a few floors below him. He oversaw the announcement made to employees over a building-wide intercom system, separate from speakers in the elevator, which instructed workers to remain in their offices in a state of lockdown.

"It appears everyone followed the emergency protocol," he said.

Clayton confirmed the Commission will internally evaluate employees' responses in addition to the official investigation by the Jefferson City Police Department, but said no disciplinary action is planned against Commission employees at this time.